Indonesia consists of more than 10,000 islands, so as you can imagine the probability for world class surf is pretty high. That’s what brought some friends from San Diego and myself to charter a boat in the Mentawais for 10 days.

The Mentawai Island chain has a dominant south to southwest swell window from around March until November, the best time of year being May thru July. Most Charters fill up pretty quickly around those times of the year so if you’re thinking about an adventure try to book early in the year. 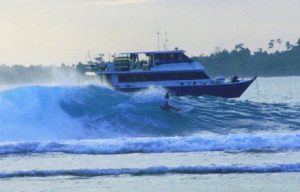 The average trip will set you back $2300.00 on the low end on up to $3500.00 for one of the more luxury boats airfare incl. and let me tell you there is a big difference. My first boat trip was budget and even though it’s indo, things like the food, sleeping arrangements, air conditioning etc. play a big role in the comfort of the trip. The waves were great but the food was sub par and the captain didn’t seem to have a good idea where the swell was. We spent allot of time motoring around checking spots.

It definitely pays to ask around and find out what boats have the best captain and cook on board, Now with all the charters that go on there I’m sure you will know someone who has had a killer time. My personal favorite is the Naga Laut, the crew is awesome and the cook, Boy, was a master chef.

The flights from Los Angeles usually leave in the afternoon on Singapore airlines (the best overseas airline bar none) and after a quick stop in Norita Japan you end up in Singapore very early in the morning. If you have a long layover I suggest staying in the travel lodge at the airport. It offers all the comforts a U.S. hotel has and only will cost an average of $35.00, you can also get a much needed massage for about $25.00. 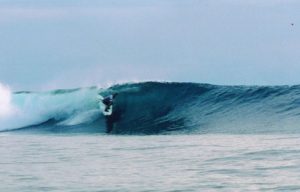 After you shower and catch a few z’s the next leg of the trip will bring you into Jakarta Indonesia and from there you catch a smaller plane to Padong Indonesia where your charter will meet you and transport all your gear to the boat.

From the Padong harbor you have about a 12 hour motor across to the Mentawai’s where you will wake up to warm water lefts and rights. The water is on average is 75 to 80 degrees any given time of the day and will not offer much for cooling down in the mid afternoon when the sun is turned up on high.

Remember you are just south of the equator when you pack your gear, This will help those of you that have to bring the kitchen sink.

How to pack: 4 pairs of boar shorts, 4 t-shirts, a pair of flip flops, *sunglasses, sunscreen, *zinc oxide, suncure for any dings on the reef, and regular toiletries. Super glue works as a great skin sealer for any cuts you might end up with. It’s very easy to over pack so remember you are on a boat and won’t need much. As far as boards, 2 seem to always work, any more than that usually sits on the rack for most of the trip.

Most of the boats I have been on have basic suture kits and local anesthetic and most anything you would need for an emergency. 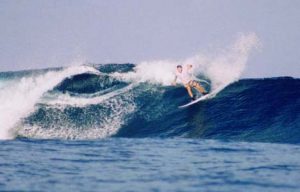 Once we got out to the islands we started our journey at a fun rippable right hander called Pussies, a very mellow right that can peel for about 100 yards on the right swell and will hold size. If that too mellow for you, across the bay about about a quarter mile away you have Bank Vaults, a fast right hander with a super hollow inside section. This spot breaks perfect around 6-8 feet on a very shallow, sharp reef. This is where I learned not to take the first wave in the set after I was washed in over the reef and had sketchy paddle back out in 2 feet of water with pounding set waves coming in.

From there we motored to a spot called Hideaways, a left that is a bit off the shore, nestled in a large bay between islands. The surf was only about 2-3 feet but very fun. I have to say this place is one of the most beautiful spots in the mentawais. It was surrounded by tiny little island with a few palm trees and sand on them.

Next place we hit was a few hours north at a spot called Scarecrows where we managed to score 2 to 3 feet overhead surf. This left hander seem to break in pretty deep water so the reef was not much of a factor as with most spot in the Mentawais. The set waves at Scarecrows had allot of power and would peel for what seemed like forever with a few fast hollow section as the wave would break over the inside portion of the reef, plenty of cover up opportunities. 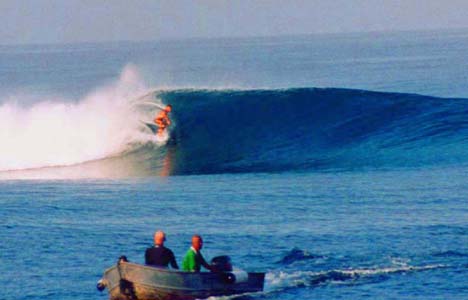 Next spot was the world famous Lances left, although when we arrived the tide was too low to get great waves we still had a great time with head high lefts, we did end up scoring a few days later at this spot with some of the biggest lefts that I have ever surfed. This wave will give you a ride so long you will kick out just because your legs aren’t used to that many cutbacks. Super fun with a pretty shallow reef that has claimed many boards in it’s time, also this is where most of our crew needed to use the super glue.

Maccas, also known as Macaronis has to be the most popular places in the chain of islands, we pulled up to a total of 4 boats on the spot and that is a light day when this place is firing. All of the boats were very cool but if you want a set wave here you need to jockey for position which in indo you don’t normally have to do. Once you get a good one you will forget about any hassles you may have had, as this wave is so machine like, every wave looks like the last and gives the surfer the opportunity to dial it in like you would at your home break. Any captain with sense in the region will know when Maccas is going off. We spent almost 4 days here as the swell started to build. There is also a new camp going up across the bay that will accommodate any land based surfer who wants to surf just Maccas and a spot across the bay called KFC’s. It looks like it’s going to be a very nice camp with whirlpool tubs and ocean views in all of the villas. Downside is that in a few years Maccas will be even more crowded than it is today. 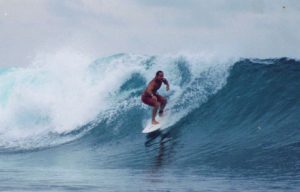 After a long session at Lances we headed around the Island just a 45 minute motor to the world famous HT’s also known as Lances right. This was also a very magical spot with a little village just inside the tree line where you can go meet some of the locals and a few traveling surfers staying there. HT’s is a very humbling break with really only one takeoff spot unless you you have the skill to drop in deep on the peak. The reef is always almost ankle to knee deep and littered with holes and razor sharp rocks. I have taken more than a few skin souvenirs here. The wave is a short hollow right that wraps around the reef with a very deceptive reform at the end, know when to kick out or you run the risk of being washed in over the reef. This break has to be one of the best in Indo and if your lucky you can score some of the best spitting barrels you have ever surfed.

Telescopes was the last stop on our way back to Padong where we spent 2 day surfing with only 1 other boat in the water. Telee’s sits about a half mile off shore and breaks in pretty deep water. Allot like Lances Left this wave just seem to go on forever with a few challenging section to beat and a few bowls to get shacked. Our captain Tom Patterson had this place wired and would pull into 2 or 3 barrels on the same wave. A few of the other goofy footers on the boat were getting the same thing by day 2 there. The waves were about 6-8 foot and when the wind would change offshore this spot would clean up and become perfect.

Across the bay there is another break called Icelands which we didn’t get a chance to surf but look like it had great potential.
These are all of the spots we had the pleasure to surf and the amazing thing is there are another 10 to 15 world class breaks within a short motor from any given break 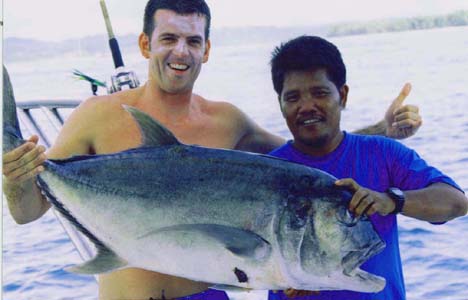 If you are planning to take a trip to Indo don’t forget to pack some simple things for the locals as much of the region has been ravaged by earthquakes and tsunamis. Pack you board bags with extra t-shirts and any old board shorts you might have laying around as the locals can always use extra clothes. Board shorts are almost as good as cash and will allow you to get a special deal on any of the souvenirs that you might be interested in.

While many of the surfers like to bring bags of candy to hand out to all of the children It would be a good idea as well to bring things like pencils and pens paper and other inexpensive learning tools that can be handed out at some of the local schools, this goes along way with the locals as they have let thousands of surfers come to their home and enjoy their reefs and waves.

Respect the people and the environment and you will be rewarded with some of the best surf on the planet.

The fishing is pretty good as well.