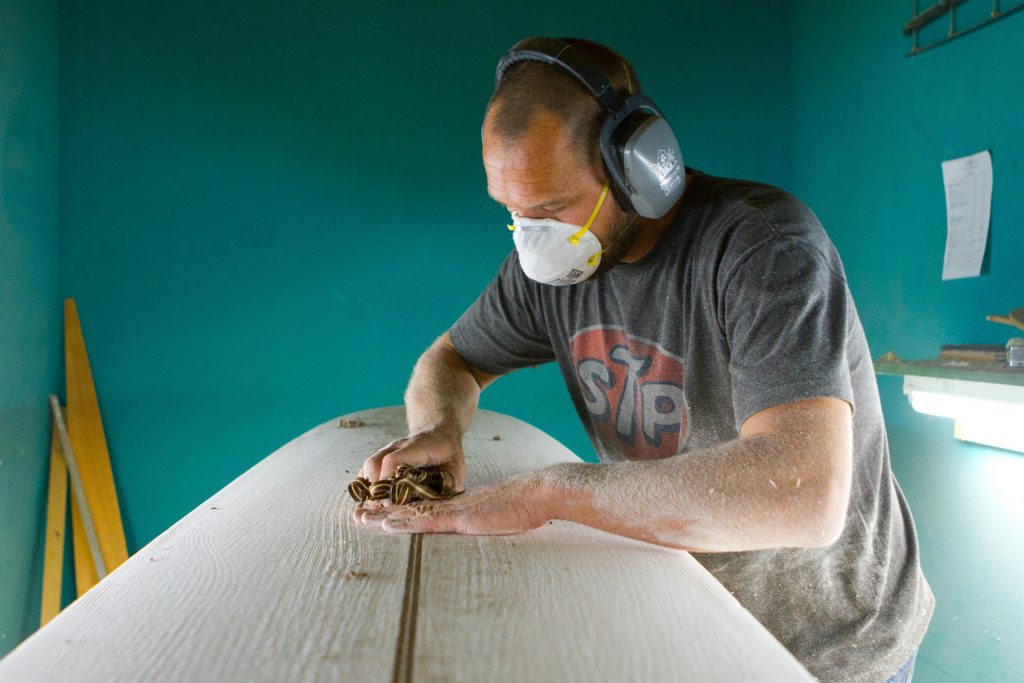 El Porto parking lot, South end… 8 a.m. the dawn patrol has already been out and is now headed for work, school, elsewhere. Parking spaces are opening up. Cars and trucks face the line-up, their decaled ass-ends stake claim to surf turf… ‘O’Neil’, ‘Heal the Bay’, a ‘Tyler’ decal on one, two, three, trucks in a row. Skip one, empty spot, another Tyler decal.

Welcome to El Porto’s “Longboard Land,” ‘Classic’ longboard land, Tyler-land. Surfer, shaper, Tyler is walking up the beach, interrupting a session, to talk to elporto.com about how and why he makes the most coveted longboards in the South Bay….

• I was a shortboarder all through junior high and built shortboards for ten years before getting into longboards. Everyone here in El Porto was on the same short equipment. I just wanted a challenge and I wanted to be different than the rest of the guys. Longboards were clunky in the early sixties. They became more finely tuned toward the mid-sixties, more finely tuned fins, the rails were tuned and the surfing was really tuned.

• To be a complete surfer and complete board builder I needed to know something about the history of surfing. That’s when I started going back into early longboard design and educate myself about the craftsmen that built boards during the early 60’s.

Today Tyler’s taking a break from traditional longboards, riding a 9′ diamond tail with high aspect ‘Marino’ style fin which he explains is going backwards to what an early short board of the late 60s like what Brewer and Mctavish were making in 67 would be like… a bit Aussie influenced. Stats: 9′, nose 18 _”, width 23”, tail 16”, the diamond – about 8”.

* McTavish invented and competed on the Vee bottom in North Shore Hawaii in 1967 fueling the board design revolution.

* Machinist turned surfer/shaper, Dick Brewer influenced virtually every shaper of the late 60’s and 70’s with his transition from longboard master-shaper to short board design innovator.

• Back in 1966, Nat [Young] showed up and won the world championships on his short 9-4 which was unheard of for that period. After that point people started chopping their boards down and things got shorter and shorter and that was where the longboard just stopped. The modern longboard today is not related to the longboard of the 60’s. It’s related to the shortboard. 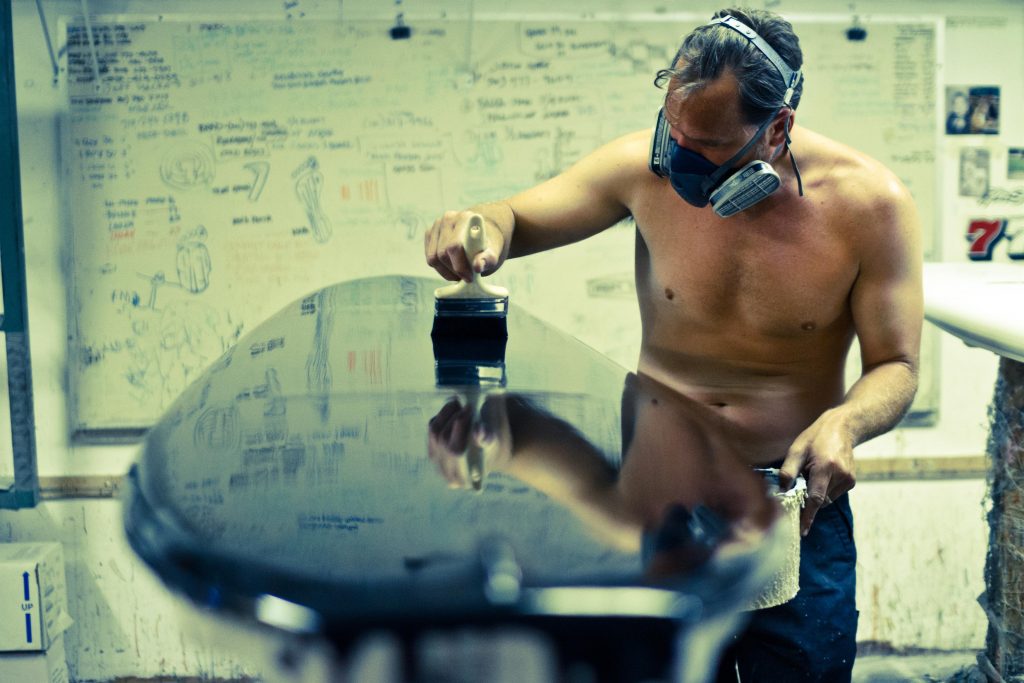 * Young’s board was nick-named “Magic Sam,” a thinner, lighter, shorter 9’4” squaretail longboard with a swept-back fin made by Greenough.

* In the mid-60’s, Australians Bob McTavish and Nat Young along with Californian kneeboarder George Greenough launched the “involvement” school of surfing by more actively riding “in and around the curl” spawning more maneuverable, shorter, sub 9′ boards and the “shortboard revolution.”

• I felt I could get my surfing and board building skills to the level they had achieved in about 1966, before the shortboard revolution. I could possibly take my surfing and long board shaping into a area that had not yet been explored… pick up in the late sixties without the shortboard influence. That drives me to this day, a chance to blaze my own path in surfing.

Bottom line, what makes a Tyler board different from any other longboard is its design is not a compromise between a shortboard and a longboard of the past. Take a look at the way his team riders surf. (Brian Kari and Aaron Holloway – El Segundo, Eric Vallely – Costa Mesa, Chris Hatzikian – Westchester) They maneuver, work a face, shift speed, everything you’d expect to see on a shortboard because Tyler’s aren’t just classic knock-offs. The type of rails and foil he builds into his boards, in his own words makes them, “an uncompromising design from the past without modern shortboard advances and current surfing styles built in.”

•The rail type is a 50/50 style, a bit of a soft egg-shaped rail without a “down rail” in the tail. When you turn, you drive off of the rail rather than surfing off of the bottom like on a shortboard. A modern shortboard gets the speed off the flat of the bottom and from the hard edge rails which help release the water from underneath. A 50/50 is a displacement rail, so you sink that rail and it’s the length of the rail (length of the board) that sets the board’s line to actually drive the board. It results in a more of a powerful turn, more banking, rather than flat-bottom shortboard turning.

For you ‘porto shortboard fiends that have never ridden a longboard, Tyler explained that it would be a bit of an adjustment to cope with the single fin longboard drive. Longboard drive requires a more down the line timing were each advance maneuver is setup in the middle of the previous one. El Porto’s dumpy conditions can make this even more challenging.

• I’ve found that surfing here as much as I do that tail rocker is pretty important. Because here we have such short walls, short faces, my boards have a good bit of tail rocker; length gives them enough push to get you onto the face and the rocker helps you rotate to maximize your turns on a wave over short distance. So you have that first initial turn and by then you’ve gained your speed so you can decide to section it or float it. The key is tail rocker for the initial bottom turn.

Tyler does all of the traditional shortboard shaping with help from Michael Gibe a long time bro he relies on for his “classic” experience and years of expertise.

• Michael’s a good friend and has been shaping for about thirty-something years and used to work for Weber in the 70’s. He was influenced by Dan Benson who was one of the premiere shapers in California and used to shape the Nuuhiwa Noseriders. Mike mainly surfs Manhattan pier, he’s well known out there.

A few moments of conversation with Tyler leaves the impression of his thoroughness. In answer to questions, he explains what you need to know, and expects you to listen. He’s proud of his own craftsmanship and how he came to it. He’s critical of shapers who take a look at an older board and ride it and take design elements from it without understanding how they came to be in that configuration. He has gone out of his way to befriend the craftsmen who designed the early great longboards.

• I’m real close friends with Hap Jacob and Dale Velzy I suck it in from all angles. I try and learn what I can about design and the sport and the history.

• Dudley ‘Hap” Jacobs… premiere board shaper from Hermosa Beach started shaping in 1953, partnered for a time with Dale Velzy putting out 125 boards a week to meet the demands of the first mega-expansion of the surfing craze.

• Dale Velzy started shaping balsa/redwood longboards in ’36 and later invented the highly maneuverable “pig” board, with its wide spot further back toward the tail that helped change how waves were ridden. 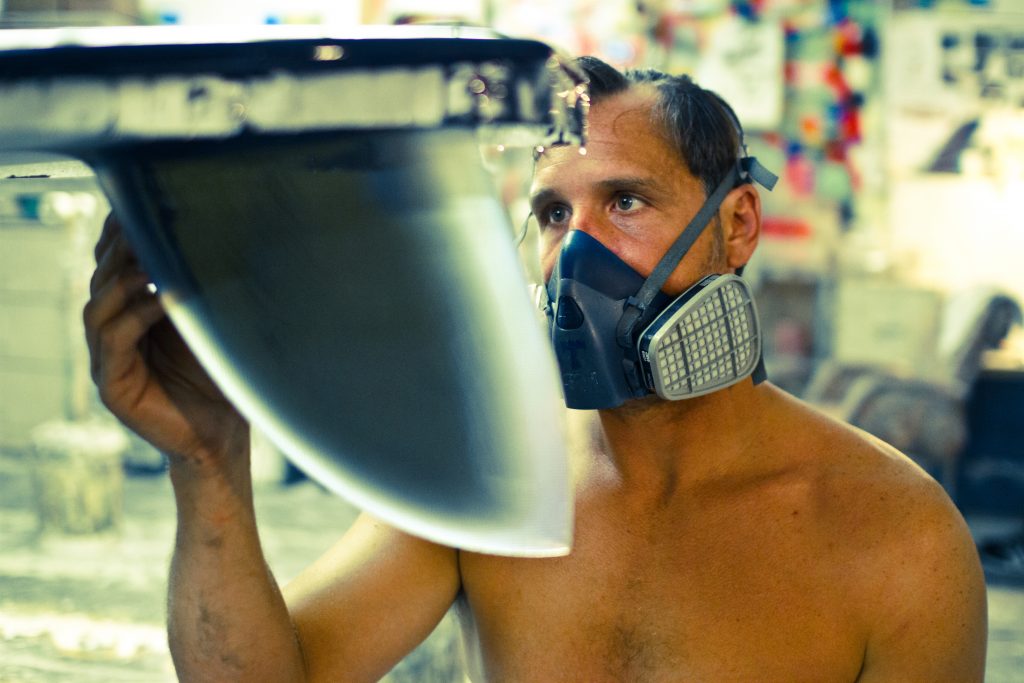 Tyler’s boards tend to become a permanent addition to any quiver. He admits that from a profit perspective, the durability of his boards is a problem.

• There are lots of guys with ten year old Tyler boards. The craftsmanship holds up. People can by two of another shaper’s boards but they go through a few of them and then figure out that they should have just stepped up and bought something that is gong to last.

Tyler only builds five boards a week. The waiting list is a dozen weeks out, so there are 60 guys ahead of you right now. Since we’re talking custom boards here, know that Tyler expects each one to be made with a specific customer in mind.

• We don’t make five boards a week because we’re lazy, but because we found that that’s the number that gives us a quality product and the time to spend with the customer. We give them something other shops can’t give them. We spend time talking design and its like a custom car and old coach work, it’s just special. I never wanted to be a board builder that had fifty boards in the water, I wanted to be the builder that gets recognized when one guy walks across the beach to check out a board and realizes, “Wow, that’s a Tyler.”

Used Tyler’s are hard to come by and aren’t necessarily a bargain. Resale value stays high, even if you can find one someone wants to part with one.

• I like to think of myself as a complete board builder, foam to glass. Others just shape and don’t learn the other materials, the glass, the resins.

• It makes a surfer feel good when a board he carries has an aura with it. You see a guy on a Tyler in another area, you talk to him. It’s like an elite club. 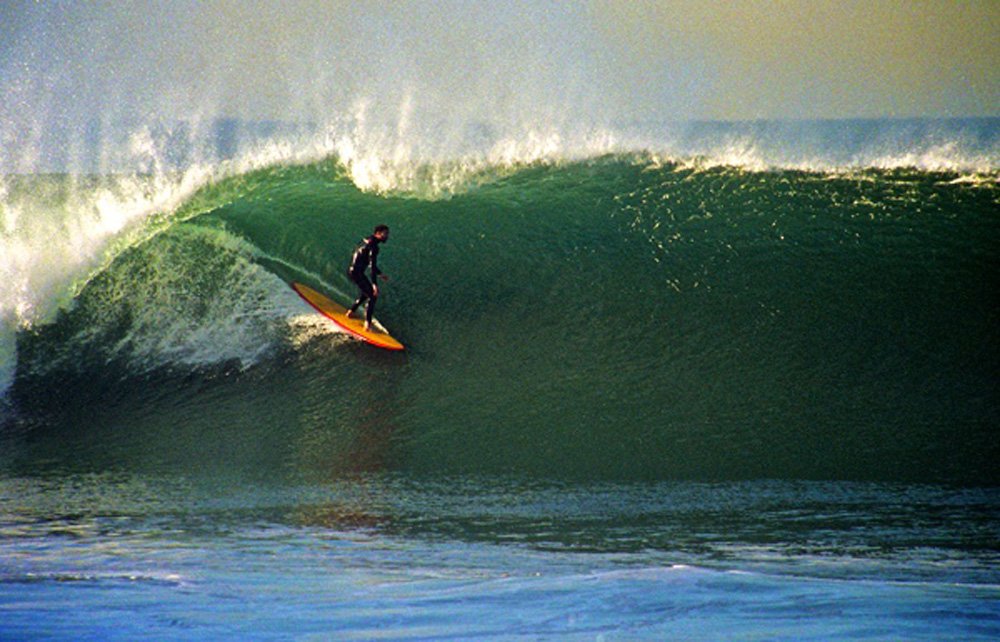 • El Porto used to be exclusively a shortboard spot… I remember the first time I paddled out on a longboard people looked at me like, “What the hell are you doing here?” That kind of inspired me. Gave me push away from the norm.

• Attitude has changed, but I think that’s just a reflection of society and people bringing their aggression from land into the water. It doesn’t have anything to do with the vibe in the water or the crowds. The crowds have always been there.

• There may be some tension between equipment… you know, long and short, but riding different equipment has become more acceptable. Hard core shortboarders will always think longboards are an “old guy” scene. Really, using the right equipment in the right conditions, that’s the key. There is an art to picking the right board out of your quiver. If you show that kind of versatility [a surfer] will be shown respect… long or short.

Tyler’s boards are noticeably more costly than others. At one time he successfully expanded from the South Bay and then surprisingly closed down shops in San Diego and Newport. Now the only place to discuss a custom board with Tyler is in his El Segundo shop. He explained that in order to control craftsmanship and make sure the buyer understood what they were paying for he couldn’t retail out of more than one shop.

The shop is kind of a throw back shop. Pretty homey, managed by his wife Katheryn, not a lot of window dressing and not a lot of stickers. It has an industrial feel; a reflection of El Segundo’s surroundings, its industrial roots, Tyler explains. “You’re not gonna get an attitude like, your not cool enough to be in our shop.” Beside boards, there’s a selection of surf apparel, wetsuits and skate selection to service the new skate park that opened up in town.

• My dad used to hang out in Playa Del Rey watching Bob Milner shape and glass. Dad built my first board for Christmas when I was nine. It was a 6′ diamond-tail single fin with a lightening bolt. I built my first board from scratch when I was twelve, in 84. It was supposed to be a 6′ double wing, swallow that was supposed to be quad but I turned it into a single fin.

The Future of shaping…

• Ten years from now… the material might not be the same but there will always be a place for hand crafted boards. Pop out boards made in China…? there’s a place for that, it gets people into the sport and then once they advance to a certain level they are going to need a hand crafted board, to advance their surfing.

If you ask Tyler if shaping is an ‘art’ he won’t say it straight out, his passion leaves you certain that he’s sculpting a board not just shaping it. Bottom line… Tyler wants to get surfers on equipment that will stoke them with performance, provide noteworthy craftsmanship based on some substantial surfing design history creds, and he won’t deny it, there’s the visual appreciation that surfers and non-surfers both recognize as “classic.”