HURRICANE WATCH: Unless Bianca starts heading offshore, to the West, So Cal will see only a glancing blow of surf for most spots! Blanca weakened early Thursday morning PDT into a Category 2 hurricane. Blanca’s slow movement likely churned up cooler ocean water underneath the storm and contributed to its weakening. Over the past few hours, little has changed to the overall structure of Blanca. Pressure has risen which correlates with the weakening trend. Since there is still plenty of warm water that lies ahead as it moves northward, slow strengthening is still forecast over the next couple of days.

Being well offshore, the only hazards it will pose to land over the next several days will be rough surf and rip currents along the west coast of Mexico. A few of the outermost rain bands in the large storm can brush the southwest Mexican coast through tonight.

Blanca will pick up speed heading into the weekend as it moves north toward the Baja California peninsula. While Blanca will be in a favorable environment for strengthening on Friday, it will move over much cooler water, causing the storm to weaken rapidly this weekend. By late Saturday or Sunday, Blanca could move very close to, if not over, Baja California. The center of Blanca should pass just to the west of Cabo San Lucas. Regardless of its strength, heavy rainfall and gusty winds are expected across parts of the peninsula, especially southern areas.

Meanwhile, Andres has weakened to a post-tropical low. 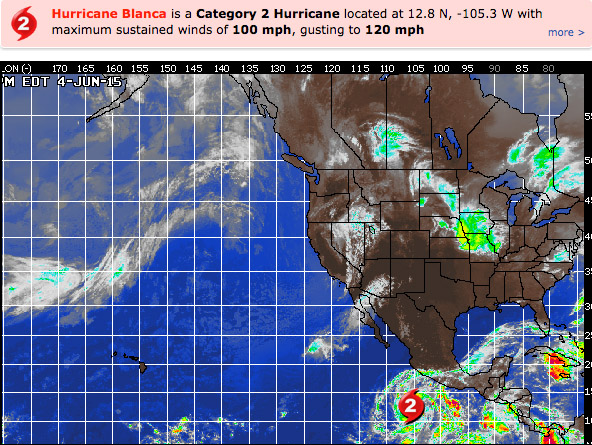 Friday morning both the SW energy will back down a bit with inconsistent waist to chest high high sets. The NW wind swell hold and possibly even increase into the chest high plus zone.

By Saturday morning all of the previous energy will continue to back down but it looks like we’ll get a little boost in NW wind swell and another pulse of SW ground swell from a 195-200 degree angle. The top spots should see waist high plus sets with a few larger waves mixing in.

Hurricane Blanca should work her way into the fold later in the day but it looks like she probably won’t move out to the West enough to send an abundance of swell into So Cal. Right now it looks like the angle would be 150-160 degrees which is sideways and will only get into the most exposed South facing breaks. Select breaks in the OC and San O’ areas will do the best with that energy. Mother Nature doesn’t always follow the script so at this point this is only a hypothesis!

By Sunday morning, if the models play out as planned, the most exposed South facing breaks should see fairly consistent head high to OH surf from an agonizingly steep angle of 160 degrees. Many spots will receive little to no swell due to the severity of the angle. The OC and San O’ areas will once again be the best bet.

Small wind swell and continued sets out of the SW will be our only bankable surf for now. We’ll have to wait and see what Blanca does over the next 48 hours!

The conditions look okay with variable 2-4 MPH breezes until 10AM and 9-15 MPH winds out of the West in the afternoon. The air temp tops out at a comfortable 70 degrees.