In February I had the opportunity to interview Pat while watching him gulp down a burrito. Pat put his life into precise chronological order. By the time it was over not only did I have a great respect for him but was also exhausted from taking lengthy notes (he was making sure I got it all).

Pat Ryan was born in San Diego in 1953. At age 11 he moved to Manhattan Beach where he learned how to do a lot of things, including surf. It all started at the Cove (Palos Verdes for the not so knowledgeable) where he would spend endless hours perfecting his ripping skills. His long “gangly” stature and surf style soon earned the Gumby nickname that has stuck with him for years 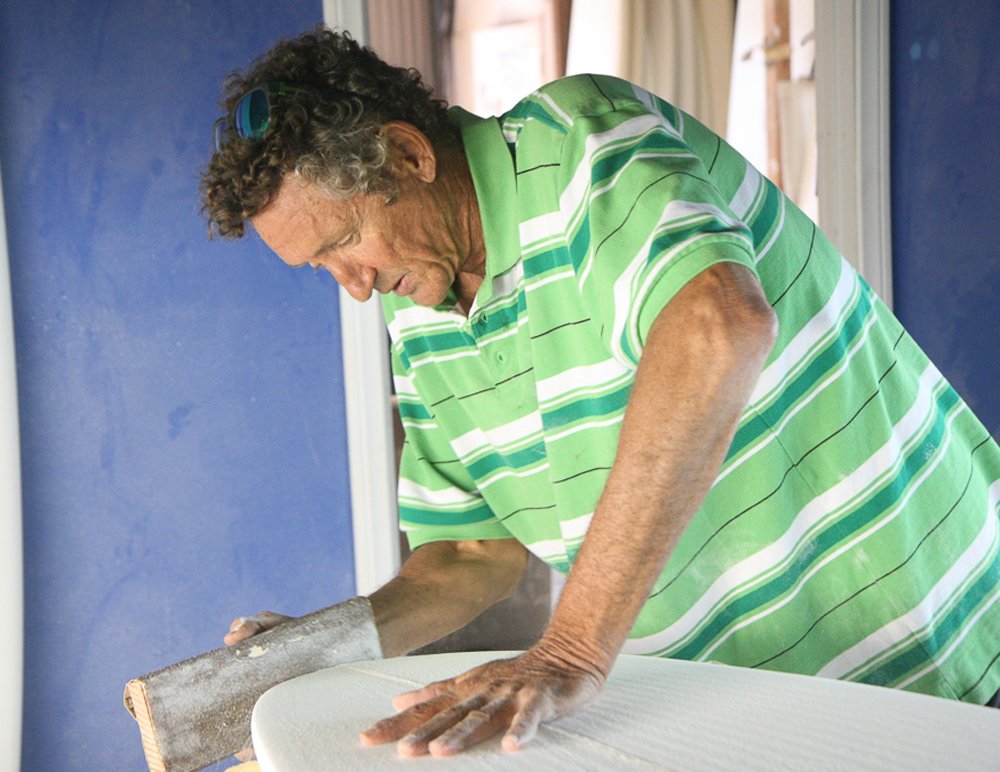 At age 15, Pat got a job working at Greg Noll’s shop on PCH (currently where the Folded Wings building is at the top of Pier Ave. in Hermosa Beach) selling boards and gear. As time went on he would begin to hang out at the factory on Valley. Soon enough he was doing ding repair while watching guys like Kip Okomoto and Gary Arnie shape boards for Noll. It wasn’t long until Greg himself began teaching Pat the art of a shaping. This was about the time of the short board revolution from Australia and Hawaii (circa 1969).

As surfing began to take a radical new path, so did the shapers. As Pat put it “we began following the Hawaiian shapers like Ben Aipa and George Downing, shaping gunny short boards.” Pat and other shapers watched the entire transition from long to short. By 1970 Pat was shaping short boards for Greg Noll.

In 1971, Pat and Eddie opened E.T. Surfboards not far from its current location on Aviation Boulevard in Hermosa Beach. Pat shaped all of the boards for the shop, “mostly round tail single fins, wingers and diamond tails”.

In 1974, Ben Aipa called upon Pat and Eddie to shape all the Town & Country boards. “It was cool, we were making mostly Bertelman stingers.” Pat expressed a fond memory “Bertelman came out, surfed in a Katin contest and our shop rat, Matt Warshaw, beat him in a heat”. Amongst the shops team riders was Dennis Jarvis, who would spend a lot of time in the shaping room with Pat.

In the late 70’s Pat continued to shape and grew more interested in volleyball. So much that it consumed most of “compulsive behavioral” time. Did you go anywhere with it? “I made $75.00 in 6 years”. Good thing you kept shaping. 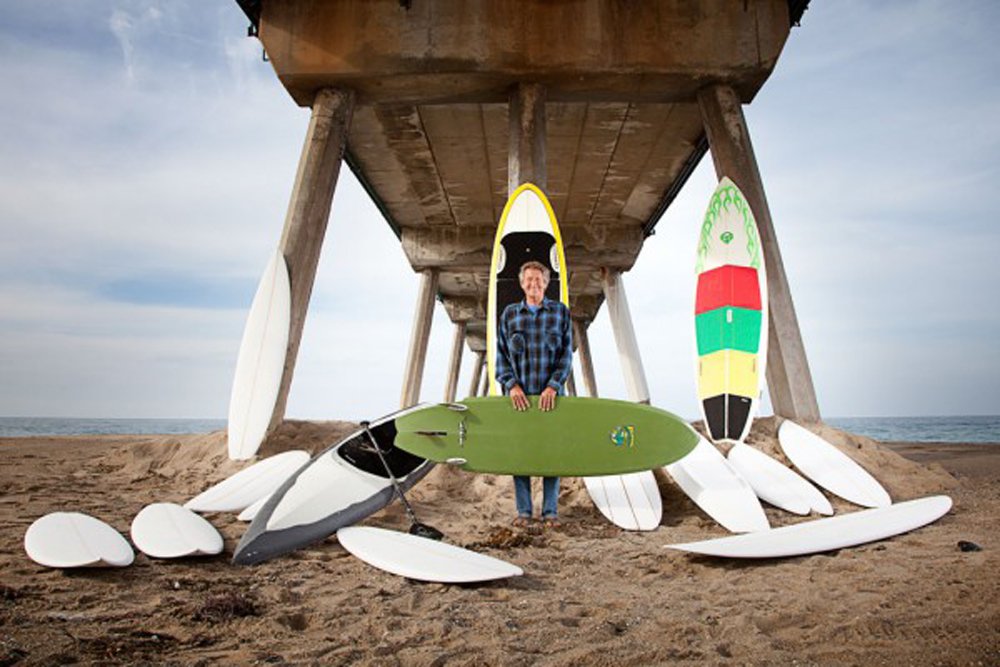 By the mid 80’s Pat again found a new sport to perfect (of course while still shaping). Windsurfing was the new “in” thing and Pat was all about it. He shaped both surfboards and windsurfers. Did you compete? “I raced slalom and actually was making it all the way to finals in California events. I preferred windsurfing big waves in places like San Carlos Bay, Baja. This was long before it was discovered as a popular spot”.

Pat’s traveling schedule came to a halt with fatherhood. With the birth of his two boys, James now age 11 and Andrew now age 14, Pat was forced to slow down and find sports that kept him closer to home. Lucky for him, across the street from his house was a basketball court. Taking it to the hoop like Magic was Pat’s newest thing and as you know by now, Pat does not do things half way. He was looking to break backboards.

Not long thereafter Pat’s basketball career ended due to knee problems. So, rather then become a handicapped person, he stopped to preserve his surfing. All of this while still shaping boards.

In 1994, you readers may recall the ad Jarvis had in the mags with Curren. Pat explained, “Jarvis was pumping boards out like crazy. I began shaping with him which revitalized my knowledge of the shortboard”. Pat was busy shaping for E.T. and Jarvis. He expressed his appreciation for Dennis’ getting him into the modern shortboard. “We are good bro’s and help each other out to this day”.

With the opening of Just Longboards, Pat was faced with even more work. Pat began shaping all Bob McTavish’s boards as well. This afforded him the opportunity to work with yet another top designer. All at once Pat found himself shaping every shape you could imagine.

In 1997, Mark Hacker (former elporto.com “Who’s Hot”) was working at Just Longboards. Mark wanted Pat to shape him a big twin fin. “That was the beginning of the “Hackfish” now the “Kingfish”. Mark would show up at local beaches with this big, thick, flat, retro/ ultra modern sled and rip it (I’ve seen it first hand). Soon thereafter, “Kingfishes” were popping up around local beaches. “It’s been a slow evolution to what it is today,” Pat explained. Mark Hacker put it this way “the Kingfish can cruise along with the soulful funk of a 70’s single fin, and you can milk every wave right to the sand.” 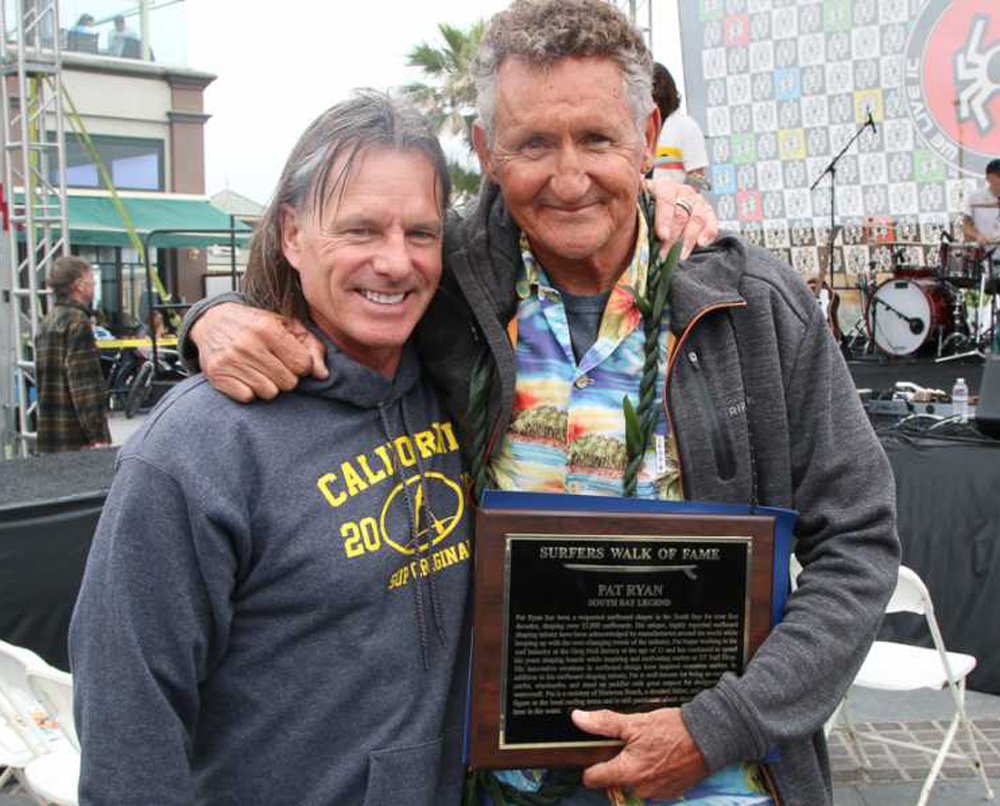 Pat has taken great pride in the Kingfish design. As he put it “Kingfish is my creation, all other boards were followed by previous shapers.” He attributes his long-term success to his ability to shape all different types of boards.

As we closed our interview I asked Pat if he wanted to thank anyone. He said “yes, Greg Noll, heck yes, for giving me a chance”; and “Eddie, for everything”. Explaining that Eddie has created an environment at E.T. that kids grow up in. “A lot of good kids worked their way through school there. There’s a guy there now that has been working for Eddie for years and is going into the Fire Department”. “For also creating a place like Just Longboards where you can see all of the classic names in one place, still for sale. A lot of the old guys will stop shaping soon and you won’t be able to enjoy these things”. I would have to say that Pat’s passion for shaping is only matched by his admiration for the guys who made surfing what it is today. By the end of the interview he had me so stoked I couldn’t help but order a new stick from him. If you’re in Hermosa be sure to drop by Just Longboards and check him out.