From my experience, most surfers that I know fall into two categories. There are those who are afraid of sharks and those who aren’t bothered by them at all. One friend that I’ve surfed with for over a decade tells me that he has never watched the movie Jaws because just the thought of it frightened him enough and he didn’t want to ruin his favorite activity forever. Still others tell me of times where the conditions in the water “feel sharky”, which convinces them to abandon their surf session regardless of how long they’ve been out there. Then there are the surfers like me – excited about people who won’t get in the water if there’s even a whisper of a shark sighting because that means less crowded lineups and more waves for us, especially at a crowded break like El Porto.

The El Porto surf break has had its fair share of shark sightings and in 2013 this seemed to be especially true. During this time locals would find news vans greeting them in the parking lot looking to interview us about surfing in spite of shark sightings. Indeed, these were great white sharks that were coming close to the shore. Nearly all of them were the 4-5 foot young-of-the-year sharks that were following stingrays to eat. Personally, I had one of these beautiful sharks swim toward me one day as I was the first in the lineup just after 6:00 am. I watched as it slowly moved toward me with that unmistakable side to side swim that you know isn’t from a dolphin. As it moved closer, I moved a bit which seemed to startle the animal and it darted off. I didn’t see it again after that and stayed in the water a good hour or so after the sighting. Mike Durand has a video of a great white shark at El Porto which has over 400,000 views and many other surfers, stand up paddle boarders, and others captured images and video of the sharks that visited the break back in 2013.

The statistics on shark interactions are quite clear. In 2017 there were only 88 shark “attacks” recorded on the entire planet. Yes, this is data from all over the world’s beaches and in every country on this earth. I use quotation marks on “attacks” because these events are nearly always a case of mistaken identity. Humans are not a shark’s normal meal nor do sharks seek out humans to eat. Large sharks favor fattier marine mammals, except for the whale shark which is a filter feeder. This is the point where someone will say to me, “Well, I’m overweight”. That is not the fat I’m talking about. The fats/oils or – blubber – on whales and seals is thicker than human fat and contains more blood vessels. Really, blubber isn’t fat to a scientist, hence the difference in nomenclature. Blubber is connective tissue between the internal organs of an animal and its skin and vital to its survival. The word “attack” came about through the media and Hollywood to get shock value and attention.

Shark bites are obviously nothing to diminish or poke fun at but, in fact, are extremely rare. In 2017 there were 5 fatalities from a total of 88 unprovoked “attacks” globally from an alleged 155 incidents. In Southern California alone, an average of 129 million beach visits occur every year with 45% of those visits being one where an individual enters the water . Out of the millions of people that engage in ocean activities globally, it makes the chance of an encounter with a shark incredibly slim. Vending machines, coconuts, cows, and cell phones kill more people every year than do sharks. Each alleged shark encounter is thoroughly investigated by scientists and experts that keep the Global Shark Attack File updated.

Back to surfers though, a number of fearful surfers invest in emerging technologies that are marketed as effective at repelling sharks. In a private Facebook group that I’m a part of, one person claimed that they felt incredibly secure with a watch-like item that they wore when surfing because it was allegedly designed to repel sharks. Unfortunately, there has been no effective repellent created to date and those products that claim they can repel sharks give a false sense of security to the user and play upon fears to make a profit. Experienced surfers and those with common sense know not to surf in a seal/sea lion rookery. These nurseries are where mothers amass to give birth to their young and to mate, making them a magnet for large, predatory sharks. If one does enter the water at one of these locations they have a chance of being mistaken for one of the seals/sea lions and bitten. Imagine if you are in the water with 49 seals. You have a one in 50 chance of being the one bitten should there be one shark looking to strike once at that time during your surf session. There is no product on the market will protect a surfer from that. (The scenario I just illustrated provides only a 2% chance that you would be the one the shark picked out to taste, by the way.)

Sharks are a vital species for healthy oceans and are in danger of extinction due to human activities. Overfishing and fear have made it so that there are approximately 75% fewer great white sharks alive today than when the movie Jaws was released in 1975. One study estimated that a tuna fishery’s catch can be comprised of up to 60% sharks, of which nearly are all discarded or illegally finned before being discarded . Removing an apex predator from an ecosystem causes what is called trophic downgrading, which leaves prey behavior unchecked and can cause complete decimation of primary producers in that ecosystem. In plain terms, one effect of removing a top predator like sharks from an ecosystem is that plant-eaters multiply unchecked and eat all of the plants in that system. This can cause a complete collapse of a particular ecosystem, leaving a barren, lifeless area that once was teeming with life. With too much of the plant life – or oxygen producers – gone, this can effect the levels of oxygen on our planet depending on the size of the ecosystem. Look up the wolves in Yellowstone for an example removing a top predator from an environment. 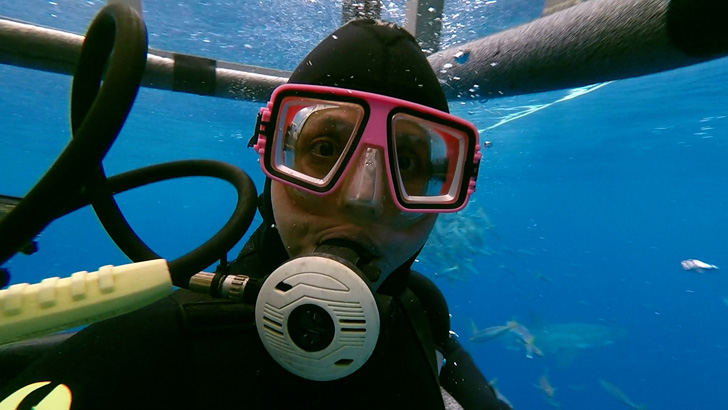 Author, Apryl Boyle about to get up close and personal with a Great White Shark – Guadalupe Island, Mexico

What can surfers do to help? Can they help? Those who don’t surf often ask us if we are afraid of sharks as I previously mentioned. That’s the question that I seem to hear the most and other surfers have told me that they get asked frequently. When these questions arise, it’s an ideal opportunity to educate those people asking. We can let them know that humans aren’t on the menu and the need to conserve sharks for the health of our oceans and planet is vital. Let them know that there isn’t anything to fear and just how rare an encounter with a shark is, much less one that is dangerous or fatal. Point people to shark advocates like me or the Shark Angels to get a better understanding of the facts. You can find and volunteer with local nonprofits like the Roundhouse Aquarium in Manhattan Beach that does outreach and education on the marine environment including sharks, which is a fantastic way to become informed. Also, becoming mindful of products that use sharks such as supplements or some cosmetics and avoiding purchasing those products is a simple, yet easy way to make a difference. Finally, if you’re in an area where scientists, advocates, and experts give public lectures or workshops on sharks, attend their events to become more informed. It is important to become more educated and to help educate others for the health of our oceans, our planet, and ourselves.

If you spot a shark while you’re surfing, boating, or any other water activity I’d love to know about it as I keep a sighting database in order to inform conservation and advocacy. Email me at [email protected] with the information or any questions about sharks that you may have, locally or otherwise. Check my website for other articles that I’ve written and photos/videos of me in the water with a variety of sharks all around the world.