Surfers are constantly in search of new adventure, uncharted coastline, warm waters, consistent swells, and uncrowded line-ups. El Salvador offersall of these things, but anyone who travels to this tiny, Central American country will soon realize that the waves are uncrowded for a reason.

When we arrived we made friends with the only other gringos at the airport — two Midwest girls who were volunteering for the Peace Corps. They had been in El Salvador for over six months and flatly informed us that during our visit we could expect to be robbed by gun or knife and get diarrhea from the food/water. This wasn’t the reassurance we were hoping for. Booking a trip to ES raised a few eyebrows with friends and family with reactions ranging from “Are you insane?” (Family) to “Should be good waves” (Friends). It turns out that friends and family were both right. Not to sound cliché but El Salvador is a land of contrasts. The country is filled with natural beauty and tremendous poverty. The people and country have been getting kicked around between a 12 year civil war, Hurricane Mitch, a devastating Earthquake, and record drought this year. Considering half of the population lives below the poverty line the people are guarded, suspicious and armed (the wealthier have guns, the poor carry big machetes).
When considering El Salvador as a surf trip destination one must consider the pros and cons: 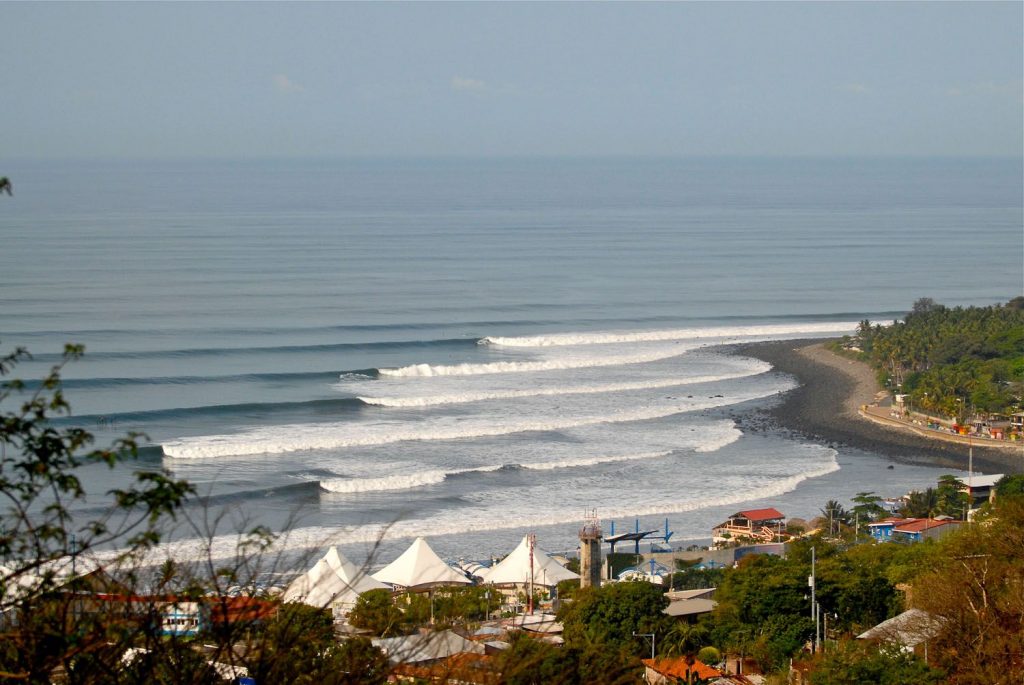 Pros:
SURF — El Salvador may be the smallest country in Central America (about the size of Connecticut) but has miles of south-facing coastline that seems designed for surf. Numerous world-class point breaks dot the coast but most surfers congregate to those closest t o the capital city San Salvador. The most striking part of the breaks was not the shape or consistency (both great) but the lack of crowds. At the peak hour (8:00 AM) there were less than 15 guys in the water and by 9:00 it was often just me and my friends. There are a handul of local surfers who are aggressive and try to dominate the peak and a few aggro spongers, but compared to So Cal it’s more like a ghost town. After a solid morning session we would paddle out (wind normally isn’t a factor) to have the point to ourselves. We’d ask ourselves “How many surfers would be out on 4’-6’ Rincon? 100? Here we are all by our lonesome letting perfect 4’ rights roll by because they aren’t set waves.” Of course now that we are home, fighting over 2’ slop in the South Bay we are kicking ourselves for letting any of those waves pass by unridden. 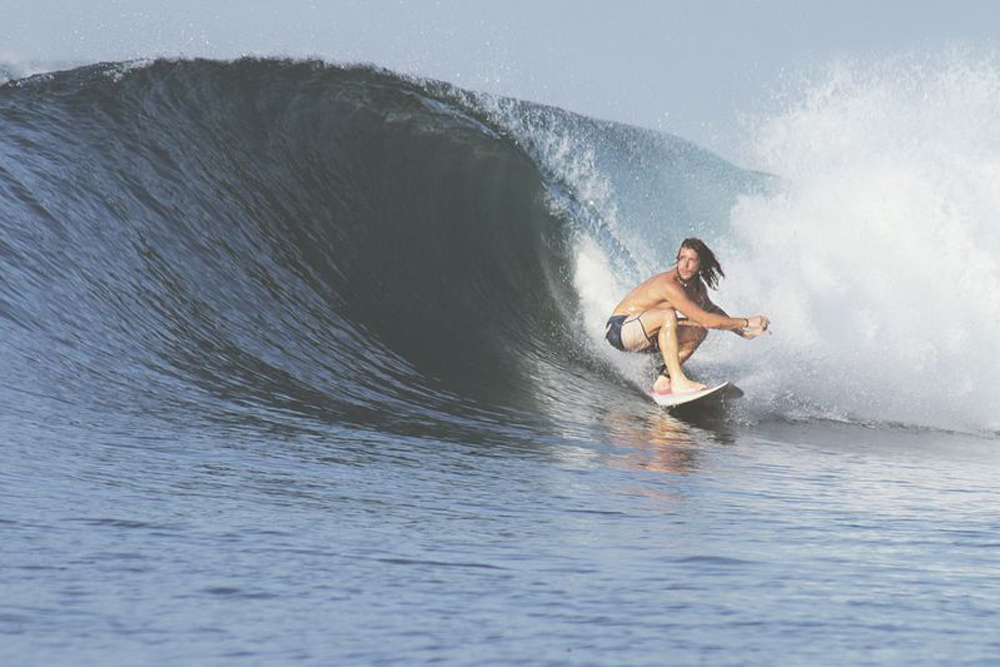 First let me preface this segment by not only recommending, but insisting you see El Salvador under the care of a professional guide. Our group never came into harms way, but if you’re stupid or careless there is serious danger around every corner. On our adventure we surfed only 3 breaks. The first being Los Flores, which is just North of a small town called El Cuco. Although considered a point break the bottom is mostly sand and the wave is very forgiving. This spot works best on a low tide and can dish up some long, fun right handers. If you’re not on it early, be advised, you will be overrun by a small army of El Salvadorian Groms. While they are nice, affable kids, they become annoying surprisingly fast. I recommend taking a panga (from the beach at Los Flores) to Punta Mango, which is a 20 minute boat ride to the North. This secluded spot offers up a much higher quality wave that reels across a cobblestone reef (much like San Miguel, North of Ensenada). This wave is steeper and faster than Los Flores and offers up some barrel opportunities if you’re looking for them. We surfed there 3 days in a row and on the most crowded day, there were 7 of us out there. Mind you there were 5 of us on the boat. We scored perfect wave after perfect wave, uncontested, unmolested and the water was 85 degrees. It really seemed like heaven on earth. 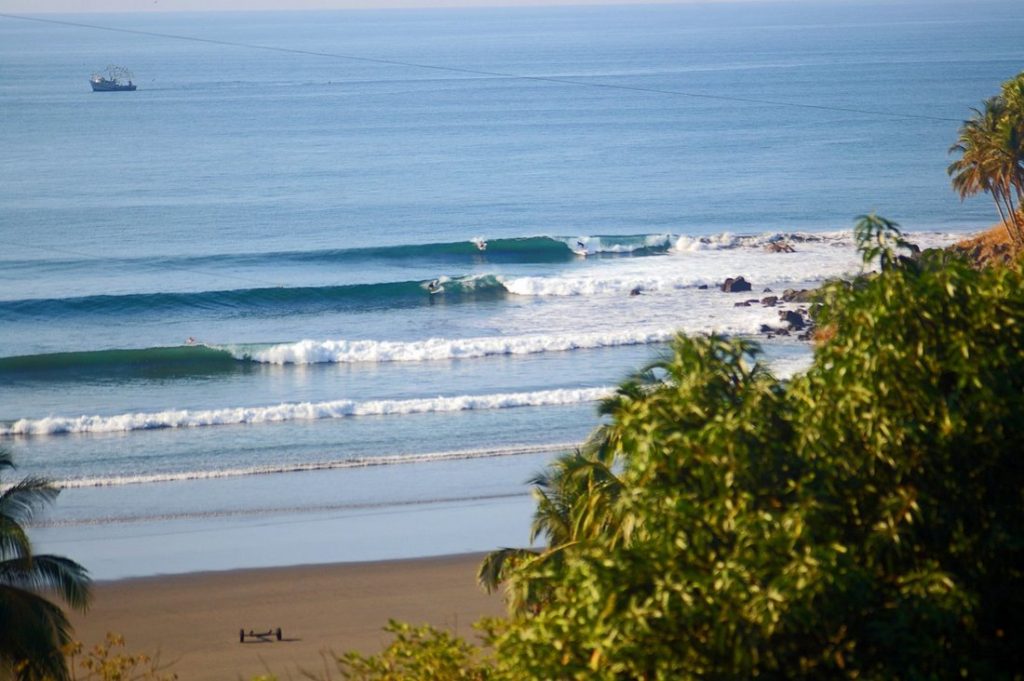 Lastly we voted to go check out La Libertad (The famous point that was filmed in Big Wednesday) and stay there for the last 5 days of our trip. The drive from Las Flores to Libertad is about 3 1/2 hours and well worth the haul. Upon arrival you feel as if you’ve reached some sort civilized world again (even though it’s a 3rd world). Upon reaching the point there are several restaurants and hotels to choose from. The wave itself was phenomenal. Every day was glassy, overhead, hollow and absolutely perfect. The crowds were never even a factor, in fact on several occasions guys from our group would get 2 hour, afternoon solo sessions. We’re talking a world class point break all to yourself. I can’t promise the same for everyone but if you watch the point all day a window of uncrowded opportunity will most likely arise. Logging 6 hours or more of water time was commonplace. Afterward cold cervesa’s and a big meal at Bob’s were on tap. There is no night life so enjoy your day and party with your bros at night. Definitely bring a couple of good books with you. If you are a hardcore surfer, this trip is for you. Hook up with your buddies and set up a trip but leave the wife and kids in the states. 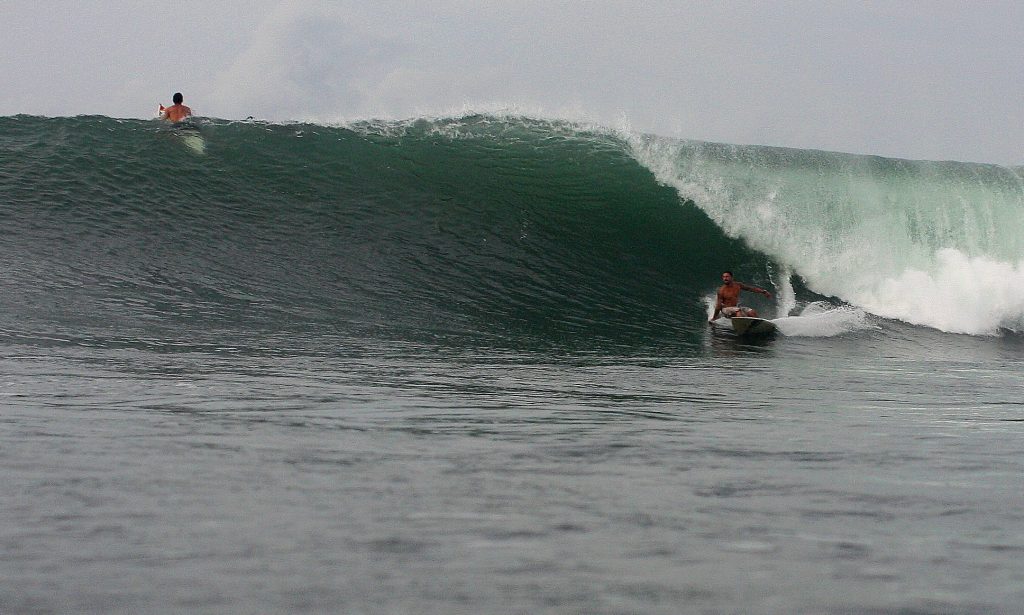 COST — The most expensive part of a trip to El Salvador is the plane flight. For those considering a trip to This is a common scenario on the roads of El Salvador ES I’d recommend hiring a guide. There are many advantages to a guide service:
* They take care of transportation (from airport pick up to drop off)
* They know the different breaks and when they’ll be best
* They speak the language and know the locals
* They can handle your lodging needs

The disadvantages of a surf guide are that they cost $ (although not much) and it means you’ll have another surfer in the line up (hopefully not a wave hog).
As for companies offering surf guides Elporto.com highly recommends using the newly founded Punta Roca tours which is run by an American named Bob Rotherman. Bob has owned and operated Punat Roca restaurant/ hotel for 30 years now and aside from being a solid, honest guy is an accomplished surfer and knows El Salvador like the back of his hand. Contact Bob if you’re interested in booking a trip. He’ll put you on the waves and protect you like a mother hen. We’ve been there and are sincere when we say this guy is the best!
contact Punta Roca

FOOD — Don’t plan to dine on Double-Doubles or burritos in ES. Depending on which surf spot you are staying at, your dinner options may be limited to the hotel restaurant or whatever energy bars you brought with you from the US. The most common national dish is “pupusas” which resemble two very thick tortillas enclosed over a mixture of beans, cheese and meat (usually pork) and fried. Our two culinary recommendations are:

1. Punta Roca (La Libertad) — This water-front restaurant is run by an American (Bob) and his son Jimmy. Not only do they offer the best view of the right bay break, they serve great food at surfer prices. There is a long list of food a surfer to El Salvador should avoid, (shellfish, lettuce, cabbage, and most of all the water) but we felt safe eating everything at Bob’s.

2. Sonja — This mother of many ninos cooks at the south end of Playa Los Flores from her shack/home on the beach. Her beans, eggs, rice and tortillas breakfasts were heaven after a three-hour surf session (and only $2 per plate).
Overall we ate well but cautiously. A fellow surfer from another group tried the oysters and spent two days surfing the porcelain throne.

NIGHTLIFE — San Salvador is the only nightlife you’ll see and only with a guide. If you value your wallet and health you won’t go out after dark and most of the surf spots don’t have bars or discotechas anyway. Gringos are known to visit San Salvador’s cultural center “Lips.” Imagine the Jet-Strip silicone-free on a discount price night.

Bottom line — In a way El Salvador’s greatest weaknesses are its greatest strengths. If El Salvador was as safe to visit as Salt Lake City it would be overrun with surfers from FLA, TX, NC, and of course CA. Because there are only a handful of accessible surf spots and they are all point breaks — the country can’t handle a large crowd of surfers. Playa Hermosa in Costa Rica (a beachbreak can probably handle more surfers than all of the main breaks in El Salvador combined. From everything we experienced, our guess is it will take years before this pristine surf locale will be at risk of overcrowding by gringo surfers. This country will remain a semi-secret for those surfers willing to deal with sketchy security for quality point break surf. El Salvador has some great surf for those willing to deal with the negatives listed above.

Essentials to bring:
Sunscreen — Lots of it, the sun is very strong and your surfing won’t be limited to dawn patrols. I’d also pack a rash guard and possibly a water-hat for those who like three session days.
ReefWalkers — They may give you a weird feel on the board and make you look like a dork but they’ll save you feet from many barnacle-encrusted rock walks in and out of the surf.
Playing cards & tunebox — Your non-surf hours will be spent napping, eating and drinking in your hotel room. Its good to have something to break up the boredom.
Candy and surf stickers — Ninos are everywhere and its good karma to make them happy. Bring a bag of Starbursts or something that is easy to hand out and won’t melt.